This article pertains to all of the known beta elements and unused content from Vexx.

Due to time constraints and insufficient funding, many elements and levels were cut, while others were changed through various stages of the game's development.

On March 20th, 2021, videogame preservationist website Hidden Palace uploaded and dumped over 700 unique prototypes of various PlayStation 2 games in an archivist project called "Project Deluge." Three of these are prototype builds of Vexx, and share differences from the final version of the game. The prototypes can be played on the PCSX2 emulator or on a hacked PlayStation 2 console.

On September 18th, 2021, Project Deluge dumped numerous Xbox and Sega Dreamcast game prototypes, including one prototype build of the Xbox version of Vexx. Like the PS2 prototypes, it can played on the Xemu emulator or through a modified Xbox console.

The earliest of these prototypes is dated to November 2nd, 2002. This prototype build served as a preview version given to journalists and members the press, as seen in this video from IGN. This build has the largest amount of differences from the final build. It is extremely unfinished and riddled with bugs and glitches. It also suffers from frequent stuttering and hitching due to preloading not being properly implemented. The ISO of this build can be downloaded from archive.org.

Differences from the final version[] 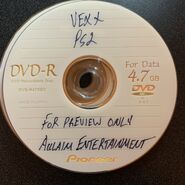 The disc containing the prototype that was dumped by Hidden Palace.

The title screen in the prototype.

The main menu in the prototype, featuring the "Free Strategy Guide" option.

The Hall Of Heroes in the prototype. Note the alternate Rage Meter placement and design.

A screenshot of the opening of Timberdale.

Vexx running after just collecting a Shard in Timberdale. Note the pop-up notification displaying the amount of Shards collected.

This prototype build is dated to January 20th, 2003, built five days after the final North American build. It was built for review purposes. The ISO of this build can be downloaded from archive.org. 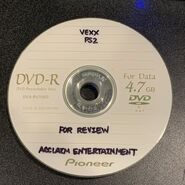 The disc containing the Jan. 20th, 2003 prototype that was dumped by Hidden Palace.

Vexx in the Tutorial.

The title screen in the prototype. Note that it says "Press Start Button" rather than just "Press Start."

The main menu in the prototype. This menu lacks the "Extras" option.

Vexx waking up from the opening of the Tutorial level.

The door being assembled in the Tutorial level.

Vexx standing in the Tutorial, with a notification to move the control stick.

This prototype build is dated to February 6th, 2003. The ISO of this build can be downloaded from archive.org.

This prototype build is dated to January 15th, 2003. It was compiled one week before the final North American Xbox build (the first retail build) for review purposes. The ISO of this build can be downloaded from archive.org. 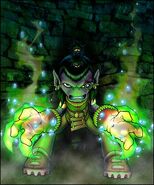 Clip, Vexx's second design, with Mischief on his shoulder in the middle.

A second version of Clip and Mischief, showing Mischief as more frog-like and Clip with a different ear design.

An early concept of possibly Clip or Jinx.

Another early concept of possibly Clip or Jinx, showing a more Jak-like character

A more human concept of Clip or Jinx.

An early concept of Reia.

An early concept of Reia.

A concept of Reia, closer to her final design in some aspects. 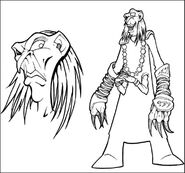 A early concept for Clip and Mischief, showing them traversing an ice area overlooking the rest of Astara.

An early concept of Astara. 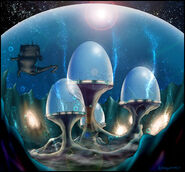 Concept art for the Below, taken from the now-defunct Vexx website.

Concept art for the Summit of the Sages, taken from the now-defunct Vexx website.

An early concept of the Citadel of Shadows and a mysterious castle level.

An early concept of Dragonreach, complete with the early build.

An early render, back when the game was named "Jinxed." Note the surrounding characters' different colors/designs.

An early render of Vexx, back when he was named Jinx.

What appears to be an early version of the Troll from the Below. Note the lighter color, different location, and the strange orb object he's holding.

What appears to be a second battle with the Mummy, from the unused pyramid level, Sorrow's End.

An unused dragon-type racing opponent in the volcano area.

The cut volcano world, Devil's Well. Notice the clearer and more detailed night-sky as well as the statue behind Vexx.

An early night-time render of the volcano world, showing a blacker night-sky and the presence of (untextured?) clouds.

Another shot of the volcano world.

An early version of Summit of the Sages. Note the Landspire directly behind the heads.

Vexx looking around in the early Summit of the Sages with Landspire partially visible.

An early version of Overwood.

An early version of the Puggle enemy, which is used in the manual and game guide.

Another beta Puggle in an unknown area.

A shot of the Neverglades, showing the fire world in the distance.

A beta shot of Timberdale, with Vexx using the Wing Suit.

An unused level, Talon's Maw, with the Troll from The Below shown holding a Wraithheart.

An unused top level of the Rift Hub that is only used for one cutscene in-game.

An early concept of the Neverglades.

Mummy render showing what appears to be a different meter for shards.

Unfinished render of the Moddax enemy.

Beta screenshot of Timberdale found on the Vexx advertisement on the back of the Turok Evolution manual. Tempest Peak Manor can be seen next to the Landspire.

Three beta enemies in the official game guide for Vexx.

A concept by Manuel Carrasco for the canned Vexx 2, showing what appears to be a dark version of Vexx. A Vexx 2 logo can be seen on the bottom left.

A concept for darker War Talons in the sequel by Manuel Carrasco.

An early Vexx 2 concept by Kynan Pearson. It shows a super-powered version of Vexx with a summoned spiritual creature behind him. Kynan Pearson had envisioned these creatures as new powers Vexx would've gained in the sequel. The creatures were inspired by the summon abilities from the anime series JoJo's Bizarre Adventure.

Community content is available under CC-BY-SA unless otherwise noted.
Advertisement